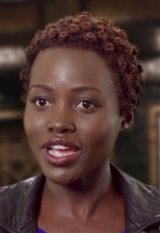 Born in Mexico City, Mexico to parents Dorothy and politician Peter Anyang' Nyong'o, Lupita Nyong'o is the second of six children. Since it was tradition in Mexico to name a child after the events of the day, Lupita received a Mexican name. Her parents, although originally from Africa, were in Mexico as political refugees but before Lupita was even a year old, they moved back to Kenya when her father was hired as a professor at the University of Nairobi. At 16, Lupita was sent back to Mexico for... See All