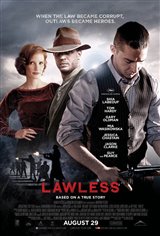 In Depression-era Franklin County, Virginia, bootlegging siblings take the law into their own hands. The youngest brother, Jack Bondurant (Shia LaBeouf), considers himself the next Al Capone—he wants to dress in sharp suits, carry guns and drive fast cars, no matter what it takes. In the midst of trying to make it big, he's also got his sights set on impressing a beautiful but off-limits Amish girl (Mia Wasikowska).

Howard (Jason Clarke) is the muscle of the operation, having survived the carnage of the Great War. Their eldest brother, Forrest (Tom Hardy), who nearly died from the Spanish flu that killed their parents, leads with strength of character and silent determination against corporate greed as the Bondurants' legend grows, along with the dangers they face.

The boys have developed a thriving, small-scale moonshine business. But their operation is threatened with the arrival of Special Deputy Charlie Rakes (Guy Pearce), who brings with him a new breed of the "law," one that is lethal and corrupt, challenging everything the brothers have built. While the rest of the county gives in to Rakes, the Bondurants will bow to no one, even if that means putting everything on the line, even their relationship with each other.

Based on the book The Wettest County in the World by Matt Bondurant, a fictionalized account of his own family.