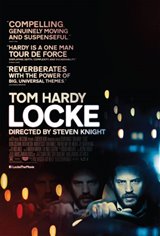 Ivan Locke (Tom Hardy) is a construction site manager. On the eve of the biggest challenge in his career, Ivan drives his BMW en route from Birmingham to London. Ivan’s phone conversations gradually make clear what’s going on and why he needs to travel to London.

First, Ivan tells his teenage sons Eddie (Tom Holland) and Sean (Bill Milner) that he won’t make it home tonight to watch the football match with them. Then a call from Locke’s colleagues Donal (Andrew Scott) and Gareth (Ben Daniels), who aren’t pleased with his sudden departure – tomorrow he is supposed to be supervising the concrete pour for a gigantic skyscraper. Two calls from two women – his wife Katrina (Ruth Wilson) and a woman named Bethan (Olivia Colman) – finally make all the puzzle pieces come together.