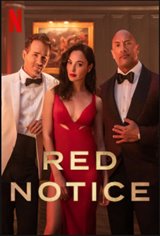 FBI Special Agent John Hartley (Dwayne Johnson) is hot on the tail of two art thieves that have now been put on red notice. After finally tracking down Nolan Booth (Ryan Reynolds), the first of his targets, Hartley recruits him to help track down target number two: Sarah Black (Gal Gadot).

The two then begin a globe-trotting adventure to bring her in, forming an unlikely partnership and friendship along the way.