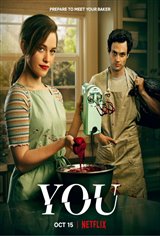 6 votes and 3 Reviews | Write a Review

New York bookstore clerk Joe (Penn Badgley) becomes obsessed when he meets a customer named Guinevere (Elizabeth Lail). He decides to learn all he can about her through the credit card she used and her social media. He follows her surreptitiously and when she happens to slip on a subway platform and falls onto the tracks, he rescues her, earning her gratitude—and an entry into her personal life as she begins to fall for him.

In the second season, Joe moves from New York to Los Angeles, where he meets a young woman named Love (Victoria Pedretti). Meanwhile, Joe's ex, Candace (Ambyr Childers), throw him for a loop.

Newly married in the third season, Joe and Love have moved into a suburban community with their newborn son to start fresh. When Joe meets his new neighbor Natalie (Michaela McManus), he falls back into his cycle of compulsiveness.