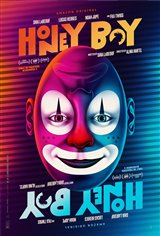 Child actor Otis Lort (Noah Jupe), 12, and his father James (Shia LaBeouf) live in a seedy motel outside Los Angeles. James, an ex-rodeo clown, brings Otis to work each day on the set of the slapstick TV series on which the boy is a star.

Despite his son's success, or perhaps because of it, James, a recovering alcoholic, subjects the boy to constant taunts and insults, as well as physical abuse.

As an adult, Otis (Lucas Hedges), now in his early twenties, has become a movie star. After he has a car crash while driving drunk, he's placed into rehab, where he gets therapy for the anxiety and rage he has due to the abuse he suffered at the hands of his father.