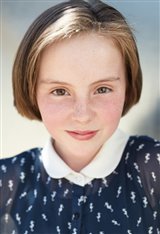 Anna Cooke is an Australian actress. Her first acting appearance was the lead role in a school production of The Little Prince. After seeing a notice about auditions for an upcoming Netflix TV series called The InBESTigators, she decided to give it a shot. After several auditions, Anna, who was 10 at the time, landed the role of Maudie Miller, who forms a detective agency with her friends. Anna has an older brother (who doesn't act). She enjoys taking drama classes in her spare time. See All