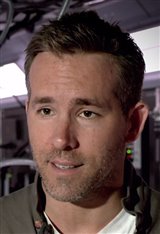 Canadian boy Ryan Reynolds hails from Vancouver, BC. The youngest of four brothers, Ryan started acting around the age of 12 when he went with four friends to audition for a part on the series, Fifteen. After beating out 400 other hopefuls for the role of Billy Simpson, Reynolds spent the next four years filming the show (which earned him a Youth in Film Award nomination) along with other series like The Odyssey playing Marco, and guest roles on The Outer Limits, Lonesome Dove: The Outlaw Years... See All