Once Upon a Time in Hollywood 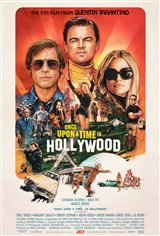 In 1969 Los Angeles, once-famous TV actor Rick Dalton (Leonardo DiCaprio) finds out it’s much harder to make the transition to film than he thought, and now finds himself struggling to maintain any career at all.

Just as he begins contemplating a move to Italy with his stunt double Cliff Booth (Brad Pitt) to take part in the growing world of Spaghetti Westerns, he moves next door to actress Sharon Tate (Margot Robbie), right around the time of the infamous Charles Manson murders.