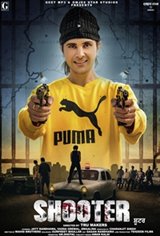 4 votes and 1 Reviews | Write a Review

The film shooter is inspired from real incidents and characters of Punjab, who chose the path of gangs and guns. And met with a sad end, Sucha a young hot-blooded guy wants to live life like a king. His thought led him to choose the wrong path of gangsterism and mafia. Sucha starts losing his beloved ones in this dark world.

When he lost everything, he realized that he had chosen the wrong path. But it was too late.